The short answer to the “Big Dig” question is that the Village of Wilmette is constructing a 5.5 million gallon reservoir in West Park, in order to provide extra capacity for the separate sanitary sewer during heavy rainfall. 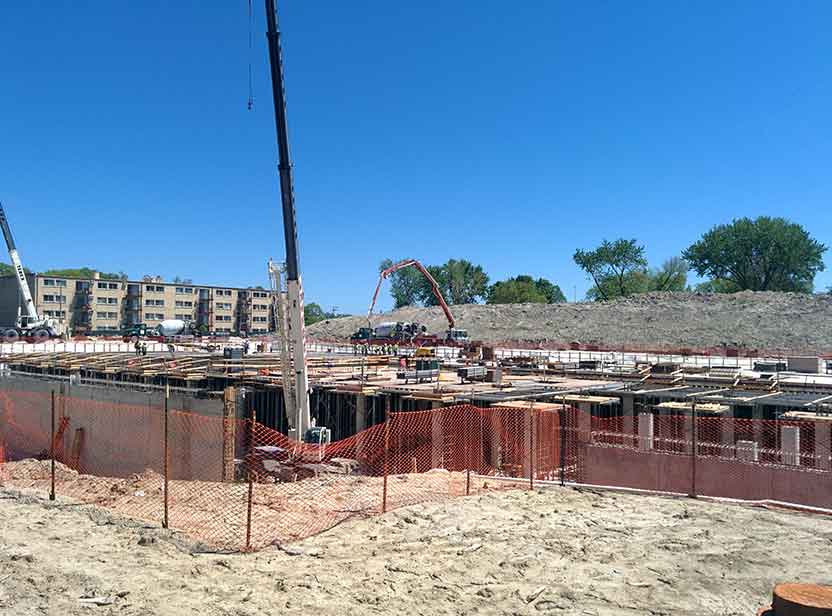 Which Sewer System Is This?

What’s confusing about this project is that it’s designed to increase the capacity of the sanitary sewer during storms. Furthermore, the upgrade will only benefit the Harms Basin, in the area of Wilmette west of Romona Road.

But wait a minute… how confusing is this??!!

I thought the separate sanitary sewer system on the west side of Wilmette was for wastewater from toilets, sinks, washing machines, etc. We can’t possibly be flushing the toilet and washing our clothes more (5.5 million gallons more!) every time it rains.

So what’s going on?

As a result of I/I, the sanitary sewer gets inundated with storm runoff during rainstorms. Wilmette has ongoing projects to prevent I/I in an aging sewer system, but success is not 100 percent.

The other big issues are at the outflow end of the system. Our sanitary sewer flows into (or is “tributary to”) the Metropolitan Water Reclamation District of Greater Chicago (MWRD), which provides our sewage treatment service.

The MWRD also treats sewage from old style combined sewer systems (CSS) in the area, including the combined sewer on the east side of Wilmette. These old style systems mix storm runoff with unclean wastewater, conveying it all to the sewage treatment facilities.

It’s easy to see why the MWRD treatment facilities get overwhelmed during rainstorms.

There are two “interceptors” where the west-side sanitary sewers flow into the MWRD system: one is on Princeton Place (north), and one is on Harms Road (west).

The MWRD interceptor at Harms Road is a trouble spot:

The West Park Project is designed to alleviate these issues for the Harms Basin, located west of Romona Road. (But the Princeton Basin, between Romona and Ridge Roads, will not see any change as a result of the project.)

Components of the West Park Project

For an early analysis (April 15, 2009) of surcharging at the Harms Road MWRD interceptor and other sanitary sewer issues and solutions:
Village of Wilmette Separate Sewer Project Compiled Deliverable

For more data from flow monitoring of the sanitary sewer, including documentation on surcharging at the Harms Road MWRD interceptor:
Village of Wilmette, 2013-2015 Capital Improvement Program, 2013 Flow Monitoring Report

In the media:
West Park sewer tank project on schedule: Wilmette official describes a slight cost increase due to unexpected soil conditions, and the need to work around water mains, underground utilities, and the high-traffic area on Lake Avenue.

Bad Behavior has blocked 47 access attempts in the last 7 days.